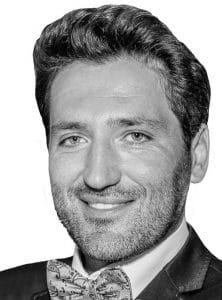 Dr. Cosmin Dima has graduated from the Faculty of Dentistry, University of Medicine and Pharmacy “Carol Davila” Bucuresti (UMF) in 2001. Since then he has continued and developed professionally and became a certified implantologist in 2004. From 2014 he holds a master’s degree in periodontology and in 2019 he has finished his PhD in surgery on the theme “Bone regeneration around implants ”. During the years he published many articles about bone regeneration around implants. He also became member in different societies such as: Society of Esthetic Dentistry in Romania (SSER), European Society of Cosmetic Dentistry ( ESCD) , International Congress of Oral Implantologists (ICOI), He is co-founder and education director of the Digital Dentistry Romania Society .

During the last years Dr Cosmin Dima sustained a lot of conferences in the field of piezosurgery, esthetics around implants and advanced surgery for ESCD, SSER, Steigmann Institute, EDAD, ADRE and many other important dental societies all around the world . He is also KOL for Acteon Romania, is certified in advanced soft tissue grafting and implant surgery by the University of Michigan and certified Xpert at dentalXp.com.

In 2020 he recieved the Lifetime achievement award “A World’s Top 100 doctor in dentistry “ acreditated by the Global Summit Institute.

The value of his clinical cases is worldwide known and Geistlich Company, has chosen one spectacular case about vertical bone regeneration, made by Dr. Dima, to be exposed on Geistlich Jubilee Platform as a recognition of 50 years of success in bone regeneration.

He is the managing director of the Dental Progress Clinic, one of the most important dental clinics in Romania.

Member of internal and international forums:

– Member of Romanian College of Dentists”

– Member of Society of Esthetic Dentistry in Romania (SSER)”

– Member of Implant Prosthetic Section of the ICOI”

Competence in Implantology – Ministry of Health, National Center for Continuing Education for

February 2017 – invited SPEAKER for ESCD Winter Meeting 2017 to sustain the conference entitled “Bone augmentation, horizontal and vertical in the same time with a cyst removal and synusitis treatment” during the XIV-th ESCD Meeting, Bucuresti, Romania

October 2016 – Excellence Award for scientiﬁc contributions value as invited SPEAKER at the X-th Congress of the Romanian Society for Oral Rehabilitation, Bucuresti, Romania

May 2016 – Presentation of a poster entitled “Aesthetic and functional restoration through tridimensional bone augmentation” within “3rd Global Conference Announced by MIS Implants” in Barcelona, Spain

May 2016 – invited SPEAKER for SSER International Congress Of Esthetic Dentistry – Absolute Esthetics, to present the conference with “Complex oral rehabilitation of the severe atrophy of the maxilla ” theme, in Bucharest, Romania

April 2016 – invited SPEAKER for “Denta 2016” International Congress to sustain the conference with “Current surgical and prosthetic concepts in order to obtain predictable results regarding aesthetic and functional rehabilitation” subject, in Bucharest, Romania

October 2010 – The 19 Congress of European Association for Ossteointegration (EAO)–Glasgow, Scotland

May 2009 – Aesthetics and functionality through a multidisciplinary approach – Bucharest, Romania

September 2008 – International course “The power of the management in dental offices” – Bucharest, Romania

This website uses cookies to improve your experience while you navigate through the website. Out of these, the cookies that are categorized as necessary are stored on your browser as they are essential for the working of basic functionalities of the website. We also use third-party cookies that help us analyze and understand how you use this website. These cookies will be stored in your browser only with your consent. You also have the option to opt-out of these cookies. But opting out of some of these cookies may affect your browsing experience.
SAVE & ACCEPT